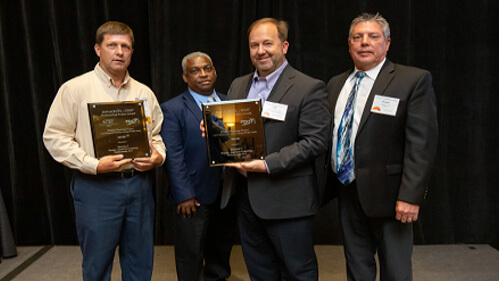 ACEC-FL, the Florida organization for the American Council of Engineering Companies (ACEC) selected American Consulting Professionals, LLC with the 2019 Outstanding PD&E Planning Award for the I-275/Howard Frankland Bridge NEPA Study in District 7 of the Florida Department of Transportation (FDOT).

American completed the Project Development & Environment (PD&E) study for FDOT to evaluate replacing the northbound I-275/Howard Frankland Bridge. The Howard Frankland Bridge is one of three crossings over Tampa Bay connecting Hillsborough to Pinellas County. The northbound bridge, constructed in the early 1960’s has reached the end of its serviceable life. This bridge crossing measures roughly 3 miles in length and carries over 157,000 vehicles per day. By year 2040, the future traffic volume is projected to exceed 225,000 vehicles per day. The study entailed a regional transit corridor evaluation, preliminary alternatives analysis work to identify, and identify long term transit options in association with replacing the northbound bridge structure. The recommended alternative will provide a new bridge structure that will carry eight lanes of traffic with four general purpose southbound lanes, two express lanes in each direction, and a bike/pedestrian trail. The addition of express lanes are consistent with the Tampa Bay Express Master Plan which identified a system of tolled express lanes throughout the Tampa Bay area. The new bridge structure will be situated to the northwest of the existing southbound bridge which will be retrofitted to carry northbound traffic after the new bridge is constructed. The new bridge will also be designed to carry loadings for a possible future transit light rail system should light rail transit be accepted by the counties on both sides of Tampa Bay. The vertical clearance of the new bridge will match the clearance of the southbound bridge at the center and the approach spans will be raised to clear estimated wave heights of Tampa Bay during future storm events. The existing northbound bridge will be demolished at the end of a planned 4-year construction period. A public hearing was held in 2013, and after changing the recommended alternative based on public input, a second hearing was held in November 2017. The PD&E study documents were submitted to FDOT’s Office of Environmental Management for review and ultimately approval under a NEPA Assignment agreement with the Federal Highway Administration.

A joint judging committee with ACEC-FL and FDOT members based its selection on the following criteria:

American is a multidisciplinary firm specializing in planning, design, and construction consulting services for transportation agencies with offices throughout Florida and also in Georgia and Maryland.